Miss World 2018 will be the 68th edition of the Miss World pageant which is all set to culminate in Sanya, China on December 8, 2018. In less than 24 hours, the reigning Miss World Manushi Chhillar of India will be passing on her crown to her successor. How can the pageant season be complete without speculations and opinions, so before Miss World pageant bids us adieu till the next year, The Kaleidoscope of Pageantry is here to present its final predictions and review on Miss World 2018, so let us get started! 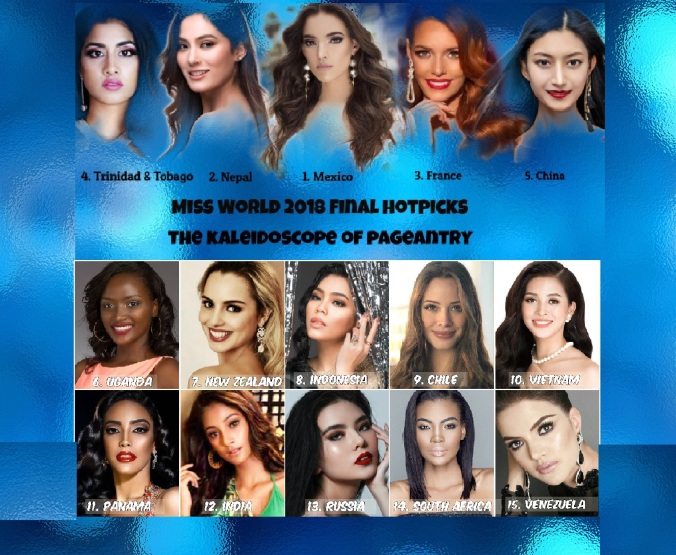 If Mexico was to satiate its thirst for the Miss World crown, I believe this was the moment for which the Miss World Organization was waiting for. I feel the crown is Vanessa’s to loose at the moment, who is already a known face in the entertainment industry after her victorious stint at Mexico’s Top Model in 2014. The way she won the Head to Head Challenge not only gives the glimpse of her confidence but also highlights the maturity with which she handles her demenour. After garnering Top 32 spot in the Top Model Round, Top 18 in Sports Round and being runner up in the most vital fastrack challenges like ‘Beauty with a Purpose’ and Multimedia, Mexico may finally win its first ever Miss World crown.

What a beautiful contestant Nepal has sent to Miss World pageant this year. Prior to arrivals, Shrinkhala was always in the radar of pageant critics because of her saccharine looks, but post the arrivals, the lady has affirmed that she is much more than her appearance! Sweeping two most significant fastrack titles like ‘Beauty with a Purpose’ and Multimedia, Nepal did not only asserted her prominence in the competition, but also secured her spot in Top 5 finals with the courage and valiance she displayed through the entire pageant. Apart from her fun-filed and vivacious social media posts, Shrinkhala never went on missing in any scene, thereby being Top 32 in Top Model round and Top 20 in Head to Head Challenge. Winning the runner up position in Sanya Tourism Promotional Video award, just adds to the fact that she is appreciated well by the Miss World Organization. For me, she is surely locked in the Top 3!

With her early victory in the Top Model challenge, France certainly gained all the limelight, turning heads! But soon as the competition caught speed, the more spontaneous aura of Miss Nepal and Miss Mexico started overshadowing her. Nonetheless, anything is possible in pageantry and with her eloquence, grace and confidence, Maëva can bring back her nation on the Miss World map after long drought of more than 60 years.

The best candidate from the Caribbean, Ysabel Bisnath’s calm and composed aura would make anyone admire the gracious lady. Throughout the competition, Ysabel came across as refined delegate, who though talked less, but when she did, she made sure everyone listens to it. After her notable placement as Top 20 finalist in Head to Head Challenge and Top 12 finalist in the ‘Beauty with a Purpose’, she is here to make her impression count!

Someone pointed out right, the key to success is consistency and here we have the host girl proving it! Right since the competition began, China almost won two Fastrack challenges by bagging first runner up title both in Talent round and Top Model round. Her ‘Beauty with a Purpose’ project was also appreciated by the Miss World Organization as she made her space in the Top 25 of BWAP Challenge by talking about the issues of education. Not only did she bagged World Fashion Designer Award but also bagged the first runner up title in Sanya Tourism Promotional Video Award. Do not be surprised if you see China being called in Top 5 tonight!

Having already created history by entering in Top 30 finals for the first time Uganda’s Quiin is impressing her fans all around the world by offering fresh vibes and spontaneous aura. Currently, she is the strongest from Africa besides South Africa.

Jessica has such a stunning face and an awe-striking personality! Her picturesque aura while appears great as she treads the runway, her kind heart is evident as she raises crucial issue like sexual abuse of children in her ‘Beauty with a Purpose’ project, which also made her the first runner up in the BWAP Challenge. Precisely the strongest contestant from Oceania!

Indonesia never disappoints at the Miss World pageant. While Alya’s ‘Beauty with a Purpose’ project revolved around village water sanitation and agriculture, making her the first runner up in BWAP Challenge, her Top 18 stint in the Talent round just affirms that she is one of the proficient contestants contending for the imperative title like Miss World.

That gorgeous face is enough to give the contestants a run for money! Chile by winning the Head to Head challenge proved that she is much more than a beautiful face. Her ‘Beauty with a Purpose’ project raising the concern of social integration program was very well received by Miss World organization.

Vietnam’s powerful ‘Beauty with a Purpose’ project talking about providing water for remote village not just garnered her the runner up position in the BWAP challenge, but also asserted how much gravity as a contestant does Vietnam possesses. Being flawless on ramp and sturdy in her demenour, Vietnam has it all to make her spot in Top 10 of Miss World finals.

Solaris Barba is consistently giving power packed performance in all the challenges. Be it Talent Round, Top Model Challenge, Sports Challenge or BWAP Challenge, she has made her presence felt everywhere. This lady certainly deserves a spotlight.

Anukreethy’s story of struggle being brought up by a single parent created splash in the pageant town. After winning Head to Head Challenge and ending as Top 18 finalist for Talent round, India is all set to make its place in the semi-finals.

She is the first ever Miss Russia who has her roots in Asian heritage. Russia’s strong ‘Beauty with a Purpose’ project serving orphans, being an orphan herself speaks volumes about her as a person and as a Miss World contestant. She is certainly not going to go unnoticed by the Organization.

After winning World Fashion Designer Dress, Thulisa proved that South Africa can never be taken casually at Miss World pageant after Rolene Strauss left a magnificent legacy. Thulisa is a marvelously eloquent speaker and totally deserves a spot in semi-finals.

Looks like Venezuela is now ready to come back to Miss World map after a long drought. In the Head to Head Challenge, Veruska proved that the powerhouse nation might be sleeping but is not dead. Watch out for this beauty!

So these were our favorites for Miss World 2018. Who are your favorites? Do let us know in the comment section below!