The fifth edition of Miss Grand International is scheduled to take place on 25th October 2017 at Vinpearl Resort & Villas, Phu Quoc Island, Vietnam. At the conclusion of the pageant, Ariska Putri Pertiwi from Indonesia will pass on her crown to her successor.

Miss Grand International 2017 pageant is on the way to conclude and the pageant could not be more exciting and thrilling with all the live coverage of Swimsuit Competition, National Costume Presentation, Welcome Ceremony and Dinner Gala Presentation. Today, Miss Grand International pageant is one of the most transparent and socially popular pageant in the world and justifies the grandness in every aspect.

With two weeks already passed since the pageant begin, The Kaleidoscope of Pageantry here presents its official choices for the crown after analyzing the videos, photoshoots and interviews. So let’s delve in!

1. Indonesia- Dea Goesti Rizkita- Indonesia has done her homework well and is here in Vietnam leaving no stone unturned. Dea has impressed not just the pageant fans but also the experts in all the segments. Her swimsuit performance was just a proof of how resolute Indonesia is for the first ever back to back. She has locked her spot in Top 5 of the finale.

2. Netherlands- Kelly Van den Dungen- I am sure the people sitting in the hall during Dinner Gala would have turned their heads thousand times to witness this gorgeous beauty. Not only does she has the face to leave her perceivers spellbound, but she also amazes the audience when she struts the runway in all majesty. Eyes on her!

3. India- Anukriti Gussain-  She is here to take Vartika Singh‘s legacy forward. She has the face, she has the personality and moreover not just the Indian audience but also the global one loves her of how angelic she is! Don’t be surprised if she takes home the very first Miss Grand International crown for India.

4. Australia- Kassandra Kashian– Never underestimate Aussies at Miss Grand International pageant. The country which has proved its mettle enthusiastically at the said pageant has the sash factor which is never going to fade until they have delegate like Kassandra. She is royal and possess the queenly vibes in her very demenour.

5. Peru- Maria Jose Lora- She is here to win it! She has one of the best bodies and walks the runway like she owns it. Peru is one of the major favorite of the crowd this year and will go far in the race of Miss Grand International 2017 crown. 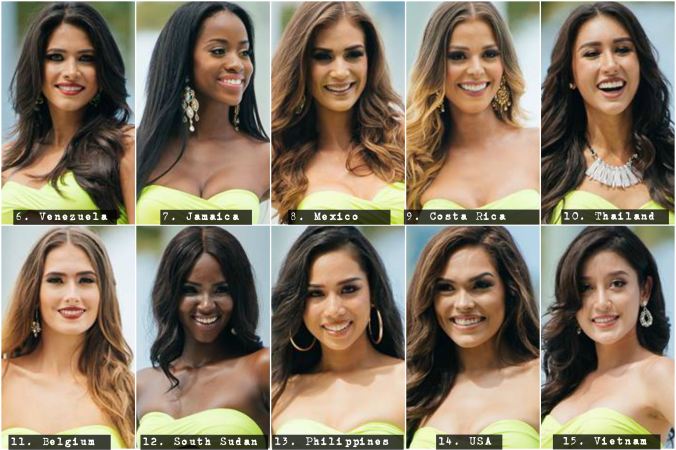 On sixth spot is Venezuela. When it comes to stage presence, nobody can ignore her. A doppelganger of Vartika Singh, she is someone who leaves an everlasting impression. Following her is Jamaica. What a serene smile! Jamaica is a performer and it shows when she takes the stage. Next up is Mexico! Mexico is vivacious and bubbly. I like the confidence she projects during her performance. On ninth spot is Costa Rica. She does complete justice to the word rampwalk. The way she smiles is ethereal, she is a performer and will go a long way. Completing the Top 10 is Thailand. She is undeniably gorgeous and proficient and follows the success path of her predecessors, I am loving her.

Belgium has the charm which brings her in spotlight. Next we have South Sudan, who not just walks perfectly but also embodies the grace which is worthy of appreciation. Thereafter, we have Philippines, who has come to the pageant with a lots of preparation and reflect vivaciousness in her persona. Next up is USA. She is smart, sexy and charming, love the way she smiles. Thereafter we have Vietnam. She has the experience, poise and grace to shine.

Fiji has yet again proved out to be a major pleasant surprise. She has the oomph to steal the limelight. Then we have Nigeria, who is a pretty black barbie. She is just perfect on ramp. Following her is Ukraine, who owns a magnificent beauty. Subsequently, we have Paraguay, who is flawless on stage. She can’t be ignored. On number twenty, we have Colombia, she is sultry and fierce.

On twenty first spot is Haiti who slays the runway when she shows her perfect moves. Next up is Sweden, who has an angelic charm difficult to forget. Completing the quarter finalists spot are Brazil, England and Dominican Republic, who have wowed the audience every now and then.

So these were my favorite picks for the title of Miss Grand International 2017, who are your choices for the crown? Do share your opinions! Also, this list is subject to change after preliminary competition and the new hotpicks will be released prior to prelims. Till then stay tuned! 🙂

Who Should Be Miss Grand International 2017? Cast Your Vote HERE!

One thought on “Miss Grand International 2017 Hotpicks: A Midway Review!”