Miss World 2016 culminated just few hours ago with the crowning of Stephanie Del Valle of Puerto Rico getting crowned as the new Miss World and Yaritza Reyes of Dominican Republic and Natasha Mannuela of Indonesia as the runner ups respectively. 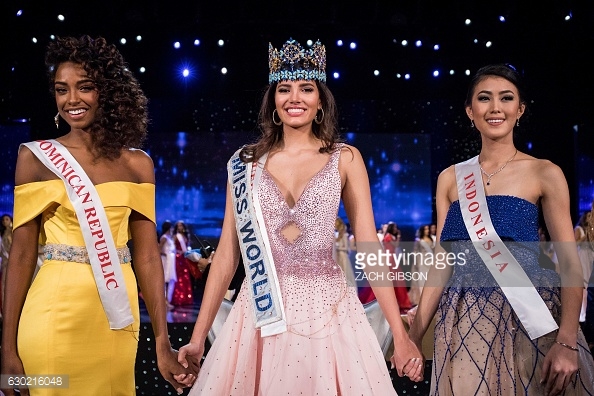 The 66th edition of Miss World was totally a spectacular one to talk about, so I am here with my honest review on the grand finale of Miss World 2016. So let’s go! 🙂

It would be unfair if I don’t mention that Miss World 2016 opening was magnificent. The grand finale of Miss World 2016 ditched the traditionally boring introduction of delegates where the ladies walked down the stage in evening gowns while their country’s name was announced by the host of the show in the background. 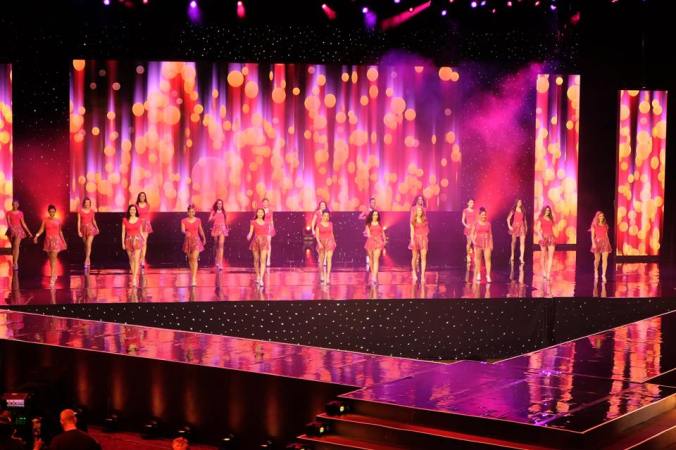 This year the contestants opened the grand finale of Miss World pageant with an energetic, spunky and vibrant dance number where the delegates were divided in three groups donning red, blue and white dresses. This totally reminded me of the fun element Miss Grand International and Miss Supranational opening numbers embody. Indeed a laudable change by Miss World!

The show was hosted by former Miss World, Megan Young, who won the first Miss World crown for Philippines back in 2013. Megan Young as usual looked charismatic in a beautiful silver evening gown with her shimmering locks let down straight.

The Miss World Organization abandoned the Leaderboard system this year, which kept the audience curiously glued to the show till its conclusion. After taking up the stage, Megan Young along with Steve Morley announced the winners of Fatrack Challenge Events, who made a direct entry to Top 20 quarter finalists spot. 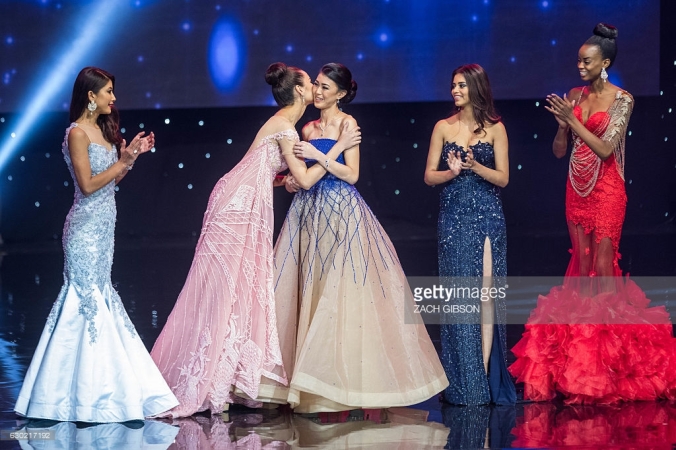 The entry of Korea was a total surprise. Other than Korea and Brazil, I predicted eight semi-finalists correctly in my prediction lists.

Surprisingly, Tímea Gelencsér from Hungary, who was considered to be major front runner for the crown and was topping every leaderboard of pageant critics, including mine, could not advance to Top 10 semi-finals. The reason behind this is stated to be her aloof persona by many of the sources present in the venue, revealing that she did not mingled well with other delegates and staff present there. But whether this rumour is true or not cannot be claimed. Inclusion of the host delegate, Audra Mari of United States in the Top 10 semi-finals was also not a surprise.

Miss World Philippines, Catriona Gray had the best evening gown of the show. The coral coloured Francis Libirian creation was spectacular and her subtle and sober styling just added glitters to her beautiful aura.

Catriona’s beautiful evening gown with a high bun styling reminded of Megan Young when she was competing at Miss World 2013.

If Only She Was There!

Ana Girault from Mexico, who was talk of the pageant world even before the Miss World pageant kicked off, was shockingly snubbed from the Top 20 quarter finals. If only she was there, her fans would have loved to see her dazzle in her lovely evening gown.

It is after 23 years that a contestant from Caribbean has won the Miss World crown. The last time Caribbean country won the crown of Miss World was in the year 1993 when Lisa Hanna from Jamaica won the said pageant. This year witnessed the placement of two Caribbean countries, Puerto Rico and Dominican Republic and two Asian countries, Philippines and Indonesia and one African delegate, Kenya in Top 5, which was indeed a commendable thing to perceive. The pageant witnessed total American, Oceania and European blackout in the Top 5.

So overall it was an Asian dominance at Miss World 2016.

The final question and answer was superb in this edition. Unlike former editions, where the contestants were asked why do they want to be next Miss World, this year we heard myriad of questions and interesting answers

Miss World 1988, Linda Petursdottir: What can you do to improve education in the world?

Evelyn’s answer tough talks about an impressive initiative, sounds fragmented and scattered. It lacks the concise and concrete factor an answer should embody.

Miss World 1975, Wilnelia Lady Forsyth: “If you have an opportunity to change something about the world, what would it be?”

Answer: “If I have the opportunity to change something about the world, I think what I would do is send a message of how important it is to change exclusion for acceptance, to promote and provide justice for others, and the importance of helping those in need. Thank you.”

Honestly, Stephanie Del Valle had the best answer of the night. She was natural, spontaneous and came across as a genuine personality competing for the title of Miss World. She did not limited the qualities of a perfect Miss World to herself but rather talked of how she could take the advocacy to yet another praiseworthy level even without explicitly mentioning it. Ten on ten from my side!

Miss World 2002, Azra Akin: “How would you convince others to help their communities?”

Answer: “How to convince others is… Have to start from myself first. Then to start with love, then other people could see our sincere (sic) and they can inspire on how, what we do. And then [we] can continue it and share it to others again. And then one world can be one and can inspire all the world with love. Thank you.”

Natasha Mannuela’s answer was genuine and it did not sound rehearsed at all with that spontaneous body language she embodied with that enchanting smile. Although the content of her answer was not too great yet she managed to convince the jury of her impeccable personality, and that is what matters at the end of the day. 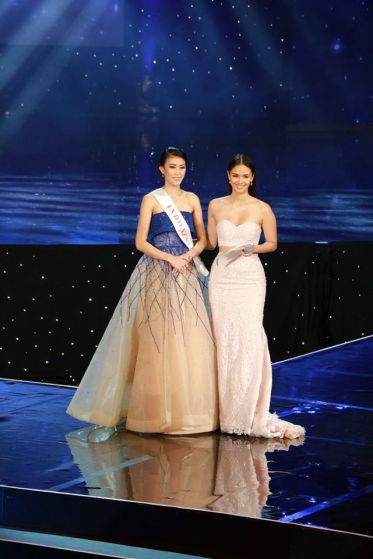 Miss World 2008, Ksenia Sukhinova: “What do you think should we be teaching the next generation about protecting our planet?”

Answer: “I think we should be teaching our next generation to protect our planet. This is the only one we have. We shall protect Mother Earth. We should all be together and encourage communities and contribute with making campaigns so people can collect their trash. We have already global warming. We cannot stop it but we can enhance opportunities to make it better.” 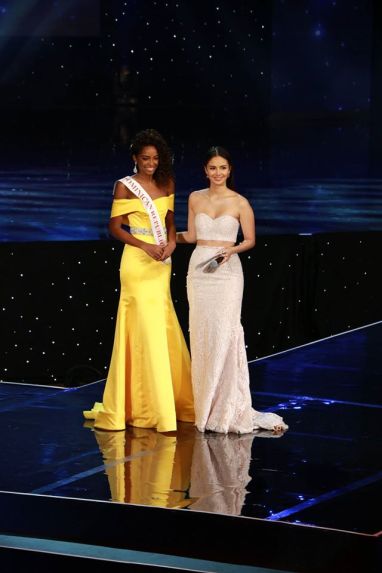 Impressive answer for sure! With that confident, bold and bang on to the point answer, Yaritza indeed convinced everyone that being a crossover contestant from Miss Universe cannot stop her way from achieving the laurels. Anybody would be swayed with that impressive answer and so did the jury sitting in the panel.

Miss World 2015, Mireia Lalaguna: “Which qualities do you think it will take to wear my crown?”

Answer: “I think, first of all, it takes bravery. To be a Miss World is to carry a burning torch. It is like action carried out by one to illuminate the lives of many. And I would dedicate my whole self, my love for the arts and my voice to try to uplift, empower and educate people. And it would be my greatest honor and duty to hold this torch high enough so that all the world could feel and see its light. Thank you.”

Impressive, concise and brilliant answer certainly. Catriona Gray delivered her final answer in the best possible way and I believe she had the wittiest and most intellectual answer among other Top 5 finalists. However, having said that, her body language perhaps lacked the spontaneity that the judges were looking for. I would have loved to see her in at least runner up spot, but the competition was totally a nerve wrecking one, and it was anybody’s game after the final question and answer round.

Mireia Lalaguna Royo of Spain was the first Miss World titleholder from her country.

The beauty queen bid farewell to her reign as Miss World in a silver evening gown. Not a fan of the evening gown, but the styling made Mireia look quite appealing in the grand coronation gala. 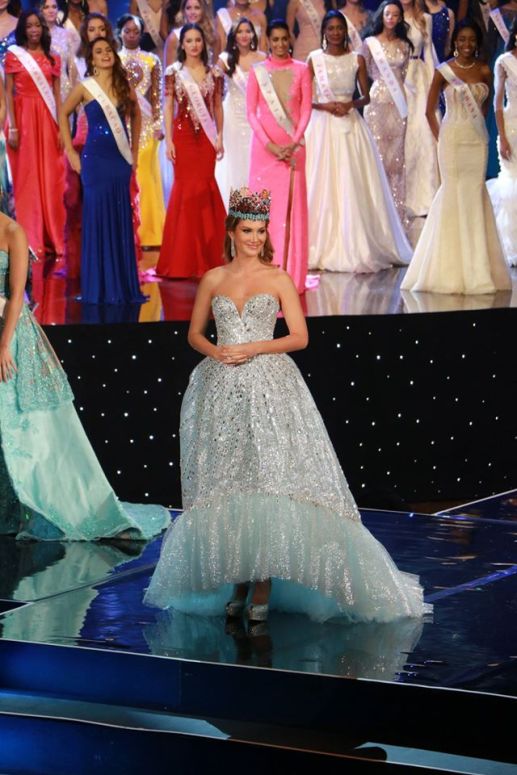 It is not even 24 hours since the Miss World 2016 finale culminated and I have already watched the crowning moment hundreds of time just to catch the glimpse of the priceless winning reaction of Stephanie Del Valle. The reaction is totally natural, instinctual and overwhelming one, something which we did not witnessed since past many years! Even the crowd standing behind the Top 5 finalists jumped with joy when they heard Miss World 2016 was Puerto Rico. 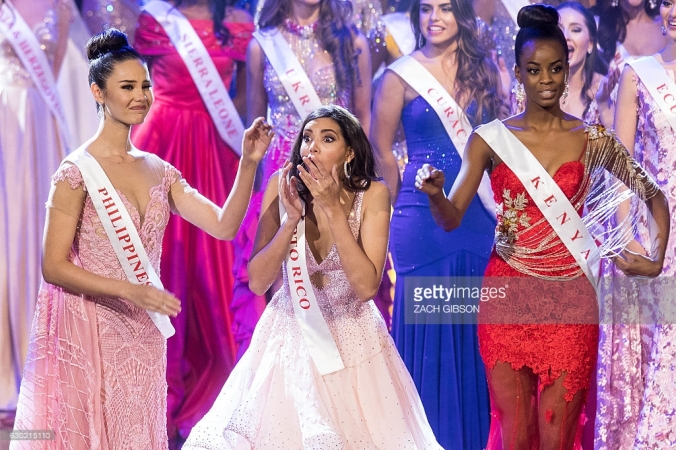 Prior to winning the crown, Stephanie Del Valle even confessed that she was expecting either Philippines or Kenya to win and hence she immediately rushed to get her crown when her name was announced as the winner. Totally a spontaneous and bubbly beauty queen!

In my final hotpicks, I predicted 13 quarter finalists correctly out of 20 shortlisted finalists. In my first hotpicks, I had Belgium and Slovak Republic in my prediction list, however I replaced them with Latvia and Croatia in the final hotpicks, which indeed proved out to be wrong.

So with this I conclude my review of Miss World 2016 grand finale. Hope you guys enjoyed it. Do share your views and opinions regarding the coronation eve of the pageant with me in the comment section! 🙂

And as I say good bye till next blog post, I promise to return with interesting blog posts very soon!